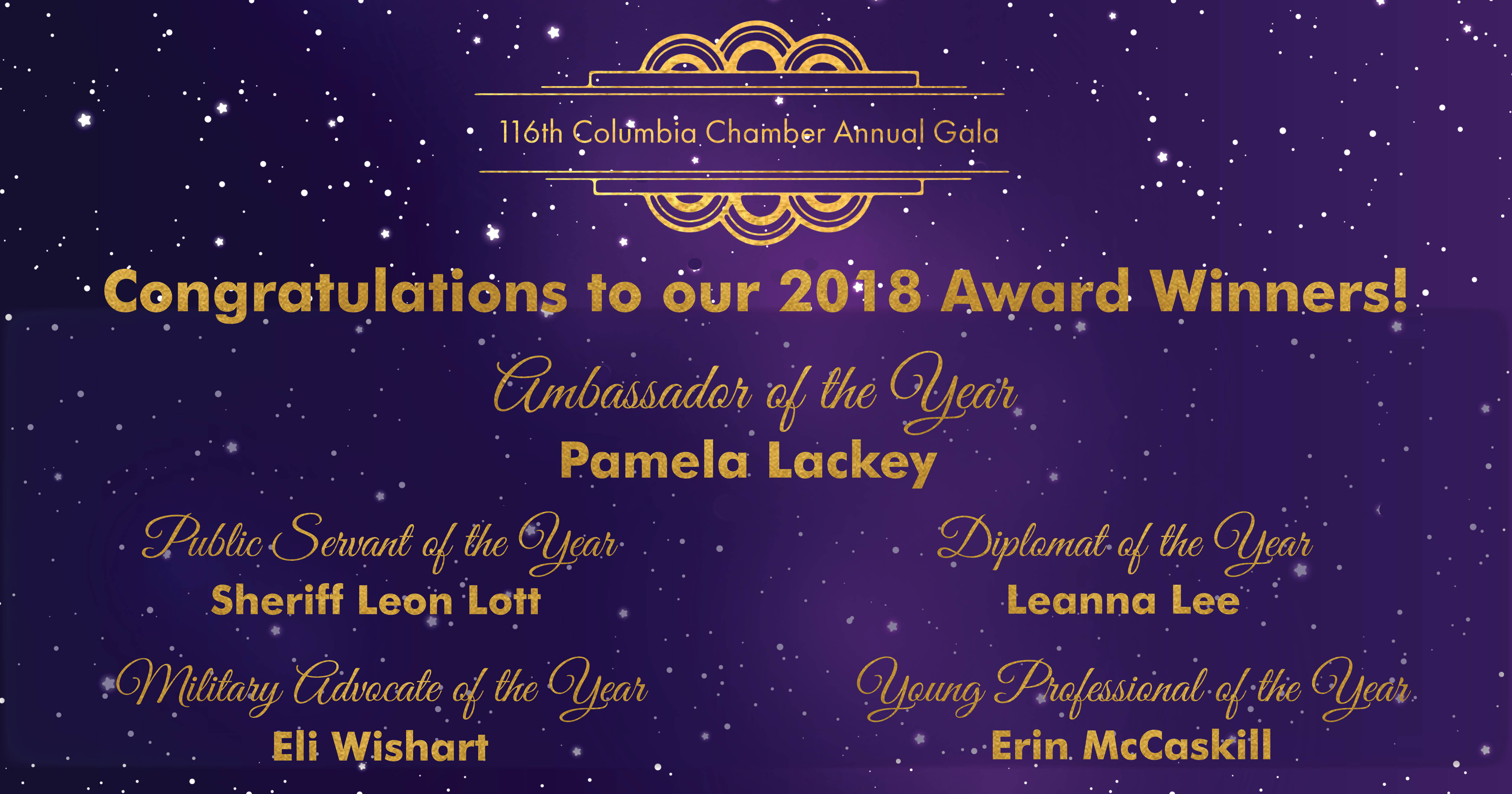 On Thursday, October 4, 2018, the Columbia Chamber will honor five remarkable individuals at the 116th Annual Gala, presented by BlueCross BlueShield of South Carolina, at the Columbia Metropolitan Convention Center at 6:00 PM. Honorees include the 2018 Ambassador of the Year, Young Professional of the Year, Public Servant of the Year, Military Advocate of the Year and Diplomat of the Year award winners.

“The Annual Gala is an opportunity to recognize and celebrate individuals who are making positive impacts in our community,” says Carl Blackstone, Columbia Chamber President and CEO, “These honorees work tirelessly to enhance the Chamber’s mission of creating and promoting an environment where businesses can thrive.”

This year, the Columbia Chamber is privileged to present the prestigious Ambassador of the Year award to Pamela Lackey, Former AT&T South Carolina President. Lackey retired this summer after being with AT&T, and predecessor company BellSouth, since 1997. She had a lead role in establishing the state’s first broadband network to provide high-speed Internet services to schools and libraries.

Out of the office, Lackey has served on numerous community boards. She is currently Co-Chair of TransformSC, an education initiative of the South Carolina Council on Competitiveness that focuses on transforming the public education system so that every student can graduate and is prepared for careers, college, and citizenship. Currently there are 63 schools from 25 districts, as well as 6 entire districts, in the TransformSC network.

The Ambassador of the Year award is given to an individual in the community who exemplifies outstanding business ethics and influences the positive promotion and preservation of the greater Columbia region. Past Ambassador of the Year winners include Dawn Staley, Ambassador Nikki Haley, Harris Pastides, Lou and Bill Kennedy, Charles D. Beaman, Jr., Ray Tanner, Ed Sellers and John W. Folsom.

Attended by over 800 Midlands business leaders, the fast-paced agenda will celebrate the successes of the past year, recognize the leadership of the Board of Directors and look ahead to the upcoming year.

For more information about the Gala, please contact Rose Dangerfield at 803.733.1128 or visit www.ColumbiaChamber.com.